The Taste of Shangrilla tour package is an enjoyable way to experience Bhutan. The package covers western and central Bhutan. A visitor will have the chance to enjoy the beauty of Bhutan and its cultural and natural wealth.

The flight into Bhutan takes you close to the great Himalayas, offering dazzling scenic views of some world’s highest glacial peaks. As you enter Paro valley, you will sweep past forested hills with the silvery Pa Chu (Paro river) meandering down the valley below. Paro Dzong (fortress) and Ta Dzong (watchtower) on the hills above the town will be a fine sight. Our representative will meet you at Paro airport, and you will be transferred to Bhutan’s capital, Thimphu, an exciting blend of tradition and modernity. Overnight at the hotel in Thimphu. 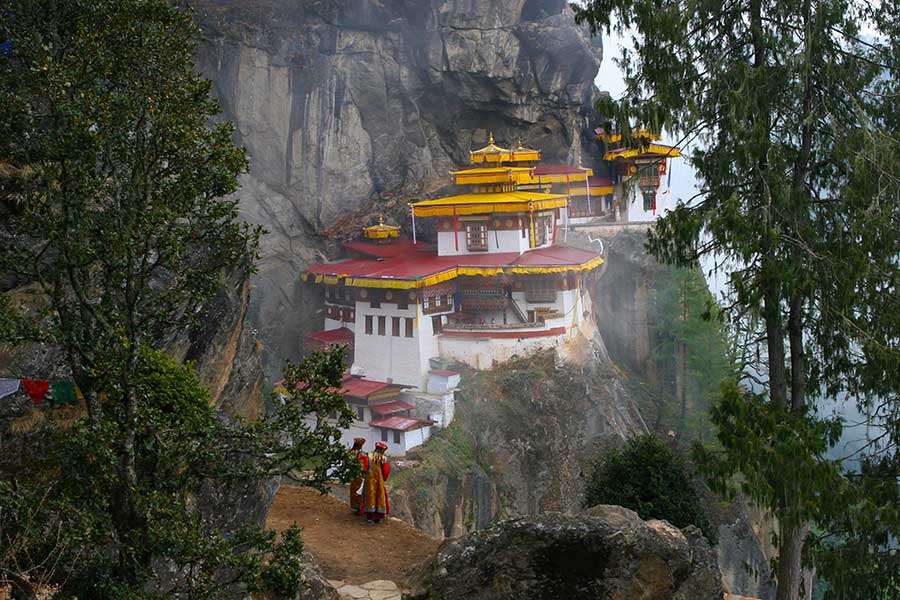 Today’s full day sightseeing in Thimphu valley. Visit the National Library, which holds a vast collection of ancient Buddhist texts and manuscripts, some dating back several hundred years, as well as modern academic books mainly on Himalayan culture and religion;

Institute for Zorig Chusum (commonly known as Painting School) where students undertake a six-year course on the 13 traditional arts and crafts of Bhutan;

Textile and Folk Heritage Museum: These museums, both of which opened in 2001, provide fascinating insights into Bhutanese material culture and way of life.

National Memorial Chorten: The building of this landmark was envisaged by the third king, His Majesty Jigme Dorji Wangchuck, as a monument to world peace and prosperity. Completed in 1974 after his untimely death, it is both a memorial to the Late King (“the Father of modern Bhutan”) and a monument to world peace. The paintings and statues inside the monument provide a deep insight into Buddhist philosophy.

Trashichhodzong: This impressive fortress/monastery houses Secretariat building, the throne room of His Majesty, the King and various government offices. It is also the summer residence of Chief Abbot and central monk body.

Handicrafts Emporium: This government-run enterprise displays a wide range of beautifully hand-woven textiles and craft products. It also carries a small collection of books on Bhutan, Buddhism and Himalayan culture.

Then continue onwards, reaching Wangduephodrang town in time for lunch. From Dochu-la pass, it is a long, winding descent into the Wangduephodrang valley, which is about 1,700m below the pass. Take lunch at Wangduephodrang town, then continue on to Trongsa across Pele-la pass (3,300m/10,830 ft), the traditional boundary between east and west. The pass is marked by a large white chorten prayer flags. There is an abrupt change in vegetation at this point, with mountain forest replaced by high altitude dwarf bamboo.

Arrive at Trongsa late afternoon and check into the lodge for the night.

After breakfast, visit Trongsa Dzong. Built in 1648 it was the seat of power over central and eastern Bhutan. Both the first and second Kings of Bhutan ruled the country from this ancient seat. All four Kings were invested as Trongsa Penlop (‘governer’) prior to ascending the throne, and the present Crown Prince now holds the post. The Dzong is a massive structure with many levels, sloping down the contours of the ridge on which it is built.

Then drive to Bumthang, 68 km from Trongsa, a journey of about 2 hours, over the Yutong-la pass (3,400m/ 11,155 ft). The road winds steeply up to the pass, 28 km from Trongsa, then runs down through coniferous forest into a wide, open cultivated valley known as the Chumey valley.

Afternoon: Visit to Kurje Lhakhang, where the saint Padmasambhava subdued a local demon and left his body imprint on a rock., the Jambey Lhakhang (7th century temple), Tamshing Lhakhang (housing some of the oldest wall paintings in Bhutan) and Jakar Dzong (administrative center of the region). Stroll in the village, visit the little handicrafts shop at the entrance to the town, and perhaps take refreshments at a local restaurant.

Overnight at the lodge in Bumthang.

Bumthang is the general name given to combination of four valleys – Chumey, Choekhor, Tang and Ura with altitude varying from 2,600m to 4,000m. It is home to many of prominent Buddhist temples and monasteries.

OR drive to Mebartsho ‘the flaming lake’ in the Tang valley. This is where Pema Lingpa found the treasures hidden by Guru Rinpoche and thus became a terton, ‘a discoverer or religious treasurer’. The Mebartsho is in fact, not a lake but a gorge through which the river rushes. It is great pilgrimage site, visitors launch small lighted lamps on the water. Images of Pema Lingpa and his two sons have been carved on the rock. It is worthwhile to visit the Ura village where there are about 40 closed built houses along cobblestone streets, giving the town a medieval feel. It is believed to have one of the earliest inhabitants of Bhutan. Overnight at the lodge in Bumthang.

After an early breakfast proceed to Punakha. Lunch at Trongsa or take packed lunch. Visit Wangduephodrang Dzong and town en route to Punakha. Overnight at the hotel in Punakha.

Morning visit Punakha Dzong, a massive structure built at the junction of two rivers. Punakha was Bhutan’s capital until 1955, and Punakha Dzong still serves as the winter residence of the central monk body. Bhutan’s first King, Ugyen Wangchuck, was crowned here in 1907. The fortress has withstood several damages from fire, earthquake and flood over the centuries. The latest flood, in October, 1994, caused great damages to the fortress but miraculously spared its most holy statue. Also visit Khamsum Yulley Namgyal Chorten, the newly built stupa.

After lunch, drive to Paro. Check into Hotel. Free time to relax. Overnight at the hotel in Paro.

Today’s full day of sightseeing in Paro valley includes, visit to Ta Dzong, which in the past served as watchtower for Paro Dzong (Rinpung Dzong) and now houses the National Museum, and Paro Dzong (rinpung Dzong), built in 1646 by Shabdrung Ngawang Namgyal.

Hike up to the Taktsang monastery (Tiger’s nest). The climb up to the view point will take around three hours. Enjoy the stunning view of the monastery, where Guru Padmasambava landed on the back of a tiger in the 8th century, and mediated for three months. The monastery was later built in this holy place in 1684. After lunch in the café walk back to the road point.

Visit Kyichu Lhakhang, built in the 7th century by the Tibetan king, Songtsen Gampo. Overnight at the hotel in Paro.

After an early breakfast in the hotel, drive to the airport for flight to onward destination.